Living in a city like Montreal that sits firmly on the fracture between two glacial language formations is without doubt an interesting experience. For those that have grown up here it may be hard at times to see the forest for the trees, but for a starry eyed prairie boy there are trees a plenty.

Language is a hot issue here, and why not? Language afterall may well be the root of consciousness, certainly the root of culture and society. How we communicate with each other is almost more important than what we actually say and here there are so many ways to say so many things.

Montreal isn’t strictly French, nor is it strictly English, nor do those two languages even begin to represent the city and all of its other languages. I know many people who are fluent in three or four languages. I know a few who really only know one. I have felt what its like to be kicked back to the minors in terms of the ability to communicate and understand – something that few of us experience if we don’t venture out of our native culture for an extended period and try to make a life for ourselves.

Montreal tries pretty hard to get bilingualism right though there are of course people on either side who just can’t bridge the divide and some that are vehemently opposed to even trying.

A report was recently leaked from a government taskforce in Quebec that seems to say that in order to make it in our increasingly integrated world Quebec needs to increase its tolerance and understanding of immigrants’ cultures and probably most nettling, learn more English. Of course the shouting started early and loud. And then I found a thread of comments trailing after a blog entry by people espousing the use of Esperanto as a universal language.

Of course I’ve heard of Esperanto, the attempt a century ago to create a truly universal language for politics, commerce and universal understanding. Needless to say it never really took off. I’ve only ever met one person who spoke Esperanto, a fellow from Brussels while playing pool in a dingy old pub in the Australian outback. So it was interesting to hear from the old language again more than five years later.

I watched a video on the language and read through those comments. Everyone claims that its ridiculously easy to learn and so, rather than making snap judgments based on little to no first hand experience I made a decision. I’m going to try and learn it.

So I’ve been working myself into a frenzy the last twenty four hours or so by watching documentaries about oil, namely Robert Newman’s comedic History of Oil, Amory Lovins talk at TED and Who Killed the Electric Car? I’ve been alternating from despair to outrage to a serious case of “I’ve gotta do something!”

Hard to believe I didn’t think of this sooner. Many of us want to save the environment AND continue to live with our admittedly excessive standard of living. With peak oil and global warming not only looming but sitting right there in the room (shhhh! nobody say anything!) we really, really need to act. The self-centered part of me is just worried about filling the tank in the car, paying the bills and what’s going to happen to my WestJet stock if oil prices keep climbing. Which is what led me to this…

If I’m worried about my stocks maybe I can save myself with other stocks, namely green stocks. If through my investments I can help alternative energy producers gain a foothold and develop their technology, well my bills will go down, there’ll be less demand for oil – lowering or stabilizing the price, which helps my WestJet stock, and on top of it all I’ll be making money off of the alternative energy stocks as they become more and more popular.

Amazing that selfishness leads to saving the world but it does.

So I’m entering the hardcore research phase. I don’t have a ton to invest, but I’ll put in what I can, and when I can afford it, well I’ll be driving an electric car and just keep pushing this wave onwards.

I may not have the scientific or legislative know-how to make big changes for the environment, but I can give money to the people who do. And so can you.

Just got back from a Bruleurs get together, and love ’em as I do I have to say things are slow. I know there are a lot of burners in town, but the critical mass of a bunch of them all in once place at one time doesn’t seem to happen much. Which brings me to… 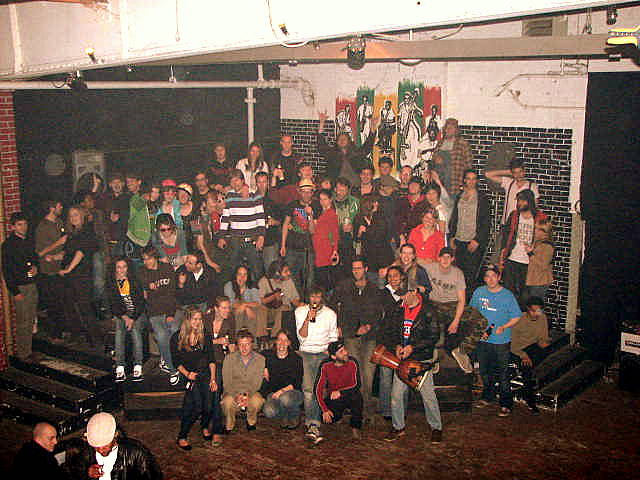 This is my place, the greatest place I’ve found so far in Montreal. The Pound is so fucking magical its hard to describe. Anything can happen. Its so open and chaotic and bubbling with potential and creativity. I’m seriously bummed that I’m not going this week due to work. It truly is the highlight of my week.

So, the plan is to try and mix the ingredients. Get Burners to the Pound. Get people from the Pound involved in Burner kind of stuff. Heck. If I can mix some UE into it all who knows what’ll happen!

Party at my place. Soon.

I don’t think I understood all the hullabaloo over net neutrality until I had to get an Internet connection at my new apartment. Now granted its an unusual space. Hundred year old factories turned loft apartments aren’t your everyday install, but its led me to some interesting places…

First Bell tells me I can’t get DSL here. Initially I accepted that and took their second option which turns out to be wireless transmission from their central office over on Atwater. Well the signal is crappy and inconsistent, move the receiver a millimetre and it loses the signal, not to mention I have to put it in the window upstairs which is incredibly inconvenient. Even without touching it the bandwidth wobbles around wildly and I’ve had two outtages within the first week. Great job Bell.

Enter Videotron. The installer showed up today then couldn’t find the cable box. Now in all fairness I understand that this building is kind of hodge podge, but, you’d think that after the first half dozen installs that Videotron might set things up properly, or at least have comments on file attached to the address explaining what’s going on. After wandering around with the installer for an hour he finally left without having done anything.

Then I start the research, and this is where I really start to see the shady undertones of the whole thing, that is on top of the total incompetence of the major players.

I can’t get Limewire or SoulSeek to work on my Internet connection, because Bell/Sympatico blocks them. A bit of research reveals that pretty much all the major players are “shaping” or “throttling” Internet traffic with impunity deciding what you can and can’t do and how much you can do it. Self imposed data police. Great.

Of course it gets even better. In the spirit of competition Bell and Rogers and their ilk are obligated to let independents play on their systems as well. Unfortunately they’re continuing to shape and throttle the accounts of users under their competitors – which kind of eliminates the point of competition and creates a… dare I say it… a duopoly cartel that can use its muscle to keep anyone else from getting a foot in the door.

And it gets better. People switching from say Bell to an independent ISP frequently find their speed drastically reduced, even though their Internet is coming from the exact same infrastructure. That’s right Bell “accidentally” changes your circuit to a slower setting. Oops.

The more I read the more disgusted I get.

So I’m cancelling both Bell and Videotron and going with Teksavy. Sure its coming from Bell copper, but at least they only get part of the money.

Oh, did I mention that it took Bell over two weeks to get my Internet to me in the first place? Bra-fucking-vo.

When I woke up the first time my room was dark. Twilight strode in through the window, making everything little more than muted greys, blacks and that blue that comes from Hollywood night scenes. As I blinked awake I noticed three distinct, tiny coils of smoke in the corner of the room by the dresser, and something moving. There in the darkness, no more than a foot tall was a woman in tight army fatigues and holsters wielding some sort of weapon which she had just shot at me three times.

I leapt out of my dream bed in my dream body and proceeded to throw this comic book figured woman – who was by now full sized into the door and proceeded with a furious makeout session, ready and eager for my first lucid dream fuck.

In all the excitement I managed to wake myself up a second time, this time in my real body and my real bed. Frustrated but excited I willed myself back to sleep, and in moments I was experiencing another false awakening in my dream room. What woke me up but something attacking me through the sheets, rushing and scurrying around the room!

After frantic tussling amongst pillows and sheets on the bed and onto the floor I found myself face to face with some sort of rat/badger thing – oddly reminiscent of the coke badger from Its All Gone Pete Tong.

I stood up, oblivious to the little monster and tried flicking the lightswitch a couple of times. No response from the lights in the room.

So goes my first foray into lucid dreaming. Apparently it isn’t willpower, careful intention when going to bed or dream masks that bring on the lucid state – rather it seems like a week of drinking and backwards sleeping habits does the trick.

Or maybe I just got lucky. My friend who was staying with me in Montreal for the week told me that I’d been talking in my sleep a few nights before which is something I don’t normally do, so maybe there was already something going on with my sleep state.

In any case I’m confident that it’ll be easier to revisit the lucid dream world now that I’ve finally pierced the veil for the first time. The first thing to work on will be maintaining my composure while lucid dreaming so I don’t wake myself up from a flight across an alien skyline or sex with a room full of Amazon warriors. This will just naturally become easier with time.